I’m baaack, and finally ready to share some of Baby B’s Monster Bday Party decorations with you!

We had a pretty small party. I wanted to go all out, but hubby talked me down, and we only ended up inviting close family. Then, because it is flu season, only about half of them could come. I tried to keep everything pretty simple, and just tried to stick with the theme.

The table-scape was just a monster tablecloth and some green letters spelling out Baby B’s name. The post about where I got a lot of this stuff can be found here.

A bit of a zoomed out view. I made the cupcakes and cake pops myself.
Hubby actually did a lot of the work on the cake pops. We made them a little too big, but I told him it was okay that they were a little goofy since they were supposed to be monster eyes anyway. The kids didn’t care, and they ate them up!

As far as the cupcakes go, I just used a couple of different frosting tips and went a little crazy with some candy eyeballs. They were also very yummy! They’re hard to see, but I got the super cute polka dot cupcake liners from Pick Your Plum. I also got the frosting tips there!

For the drinks I just glues googley eyes onto paper cups. The kids also got a kick out of those, sometimes it’s just the little details that kids love!

You can read the post about how I made these adorable party hats here.
Behind little man’s high chair we just made him a little “throne” with some streamers and balloons. If it were up to me, the whole wall would’ve been streamer-ed up, but I like the effect.
I got that little “loch-ness” looking peel and stick monster sticker at the $ tree, just thought it was super cute!

Then I picked up some simple little monster party favors for the kids in the Wal Mart party section.

These cute monster cups I got on clearance at Michael’s. They held the silverware.

Also got some silly straws for the kids at the $ tree, and as a bonus- they matched the color scheme!

I got these little monster hand puppets and zip pouches on clearance at Michael’s as well, they went in the kids’ favor bags as well.
Along with those little bday horns, that I just stuck monster stickers on so they would also fit the theme.
I handed the kids their favor bags as soon as they got there, which included the monster puppets/zip ups, monster poppers, horns, sour gummy worms, and some other various candy. Favors don’t have to be extensive…especially if you include candy- what else do kids want?
Overall, little man enjoyed his first bday party, and that’s all that really counts!

Hope this inspires you to get a little creative with your child’s bday party! If I can do it- anyone can!!! 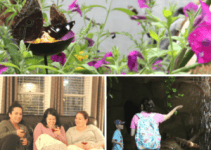 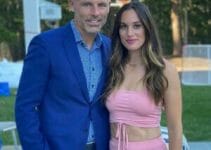 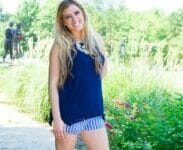