*This post may contain affiliate links*
(This post had some pictures go missing, so some of them have been removed)

Last week little man turned 2..I have no idea where the time went, and I feel as if I just finished planning his first birthday when this one snuck up on me. I apologize for the picture quality and lack of a lot of pictures, as I spent most of my time chasing a toddler and setting up. The pictures are also from my phone…so, yah. This year his party was pirate themed, as he loves all things pirate right now (and cars, but that’s a whole other ordeal in itself). We tried to keep everything pretty simple and minimal since we still have small, family only parties. But, I think everything turned out pretty cute.

We just hung some black and red streamers, twisted, on the wall and stuck some black balloons at the top for behind the table. Then I stuck half of an extra pirate hat with a die-cut “2” taped to it in the middle. I picked up a huge pack of red letters at the $ tree. That place is a great way to grab some inexpensive party supplies and favors!

On the table, I used some more of the letters and wrote something “pirate-y” and just laid out some of the favors and cups. I had some foam swords, gold and silver necklaces, gold coins, and pirate hats.

That little cardboard ship is actually 8 little favor boxes that pieced together to make the ship. Nabbed that out of the clearance bin at Wally World for like $2. I didn’t get a picture of what was inside, but there were ring pops, stick on mustaches, compasses, temporary tattoos and eye patches.

Not the best pictures, but I got those super cute paper straws in the $ spot at Target, and just stuck them in black cups. Like I said, simple!

I made this for the front door with the other side of that pirate hat, some red letters, and chalk. The kids liked it. I wanted to write “enter if ye dare”, but didn’t have all of the letters I needed. Sometimes you gotta work with what you’ve got…

For the favor bags, I just grabbed some polka dotted bags and wrote the kids’ names on them.

And since the party was at 3:00pm I kept the food simple with some easy snacks for the kids.

Seriously, SUPER simple! But, the kids ate it UP! I may have snuck in a few of the cheeseballs throughout the day as well…

And I always just make cupcakes for parties. Stuck some blue icing on top with some fish sprinkles, and some super cute pirate guys that I got off of zulily….

A few kids couldn’t make it, and it ended up being pretty small, but little man had a BLAST! He loved it! And that’s all I could really hope for, for it being his 2nd birthday.

I also got to dress him up as a pirate, which was super fun for me…

In the end, no matter how simple you go with a party, it can still be ridiculously fun for the kids. I tend to always want to go all out, but I always enjoy it much more when I keep it simple.

Thanks for sharing in this happy moment in Baby B’s life….what are some of your favorite party themes?

And if you want to check out his party last year, click: Monster 1st Birthday 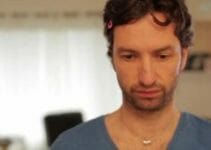