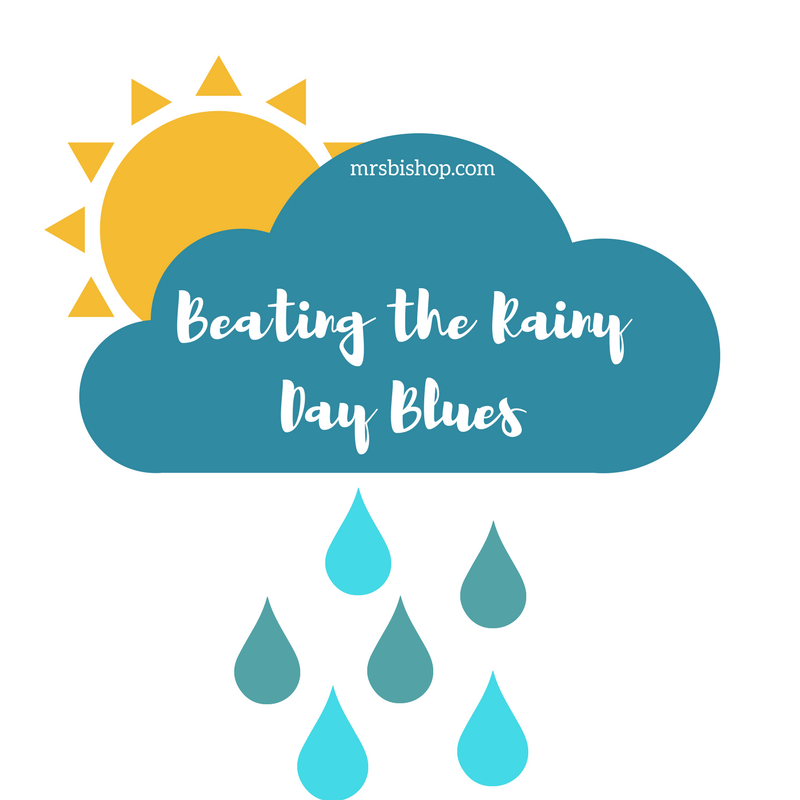 April showers may bring May flowers, but it’s no fun for a Momma to be stuck inside with an active kiddo who is still recovering from his Winter cabin fever.

So, I came up with a list of ideas to help you beat those rainy day blues with some easy activities that won’t have you expending too much energy. Because we all know that all we really wanna do on rainy days is drink coffee and nap.

Make Your Own Board Game

Guys, I’m not even going to lie. My 5 year old came up with this idea ON HIS OWN. He stuck some stickers on paper, and with a little help, cut them out. He uses the stickers as the spaces for his game. And each time, before we start, makes up what certain spaces mean. So, each time we play it’s different. Maybe landing on Goofy means go back 4 spaces. Or Dory means skip a turn. He states beforehand what the important spaces mean, and we’re off. He even adds Lego ramps he has built, or obstacles he sets in place. He uses various car characters as the playing pieces, making it for as many players as he wants. We found some foam dice we use to see how many spaces to move. It really is the simplest activity, but an amazing way for him to use his imagination. He literally can set it up a million different ways- which makes it an activity that he won’t get sick of too quickly. I say this a lot- but teaching kiddos to help in the kitchen will really pay off in the future. So, pick out a favorite recipe. Get some early dinner prep in. Let the little ones chop and stir to their hearts content. BONUS: I have noticed a huge increase in foods my picky kiddo is willing to try if he had a hand in preparing them! Draw Some Pictures and Make Up a Story

My little guy has discovered a love for drawing over the last couple of weeks while I’ve been recovering from some stomach issues and a case of strep. He has been drawing funny characters, like a reindeer who has a lot of toes, or a moose who eats socks. It’s been fun to hear him make up stories about these characters that came straight out of his own crazy brain. Write down the stories for your littles, so you can read them with them again and again.

Some other ideas that my little guy likes:

–Play Restaurant: He has me sit at the table and takes my order. He then brings me plastic food or even better, some Play-Doh concoctions that he has made.

–Build a Blanket Fort: Stay in your PJ’s and read books together. You may even be able to fit in a cat nap, sleepy Momma!

–Spring Clean: Get some extra cleaning done and get your little ones to help. Heck, pay them pennies to do extra chores that aren’t on their usual chore list. My son is good at helping dust base boards, wiping counter-tops, and helping fold laundry. The wash rags might not look pretty- but they’re folded!

If all else fails- pull on some rain boots and expect to get muddy!

I hope some of these ideas help you and your family beat the rainy day doldrums. I always had a hard time coming up with these kinds of ideas when my guy was younger because…lack of sleep.

What are some fun things you and your family like to do on dreary days?