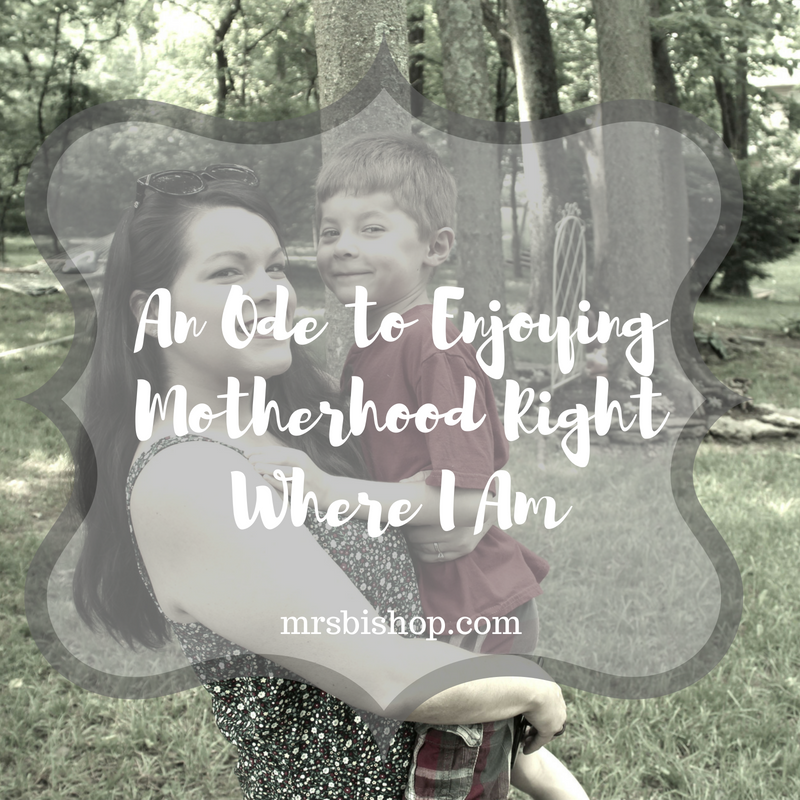 An Ode to Enjoying Motherhood Right Where I Am

Motherhood is funny. You spend so many hours in the thick, muck of it. So many sleepless nights and endless dirty diapers. Thousands of books read and songs recited over and over again. Times when you can’t even recognize yourself in the mirror because the sheer exhaustion has stolen your features. That 5 o clock witching hour lasts 1000 years in itself.

Then one day you wake up and your little one is potty trained. Can shower himself. Cleans his own room and helps you make dinner. You’re dumbfounded because something in your brain tricked you and made you think that you would have an infant- then a toddler, for eternity. And this walking, talking, full of personality actual PERSON is staring back at you.

How did this happen?

I now have actual HOURS to myself some days. Whether he’s entertaining himself, reading to himself, or at sports practice.

I’m no longer the mother to a baby, or a toddler, but a child- heading straight towards adolescence. I can’t make the time slow down. No matter how many times I squeeze my eyes shut and wish it to come to pass.

He’s growing more and more each day- he’ll be taller than me before I know it. With each passing year the time speeds up. I’ve always heard people say, “cherish this, they grow up too fast.” But did I listen?

I had a colicky, sick baby. A rough round of terrible twos and then the dreaded three-nager. And now I have such a fun and pleasant 6 1/2 year old. He’s basically my favorite person on the planet.

Have I mentioned he also eats almost everything I give him? Props to those of you who told me he wouldn’t be a picky eater forever. I seriously considered buying stock in frozen nuggets and boxed mac and cheese, because I thought that’s all he would ever eat!

Long gone are his chubby baby cheeks and dimpled thighs, and a little man is emerging. My Mother’s heart aches each time I notice something different. The length of his fingers. How long his knobby-kneed legs are getting. The way he articulates his thoughts.

So, unlike the early years, I pledge to enjoy the time we have NOW. Because before I know it, I’m sure he’ll be slamming doors and rolling his eyes at me. Telling me not to hug him in public. {It hurts to even type that, by the way.} We’ll try our best to raise him to be a good man, because it won’t be much longer until we release him out into the world.

I just really hope he still comes to visit his Mommy every now and again.