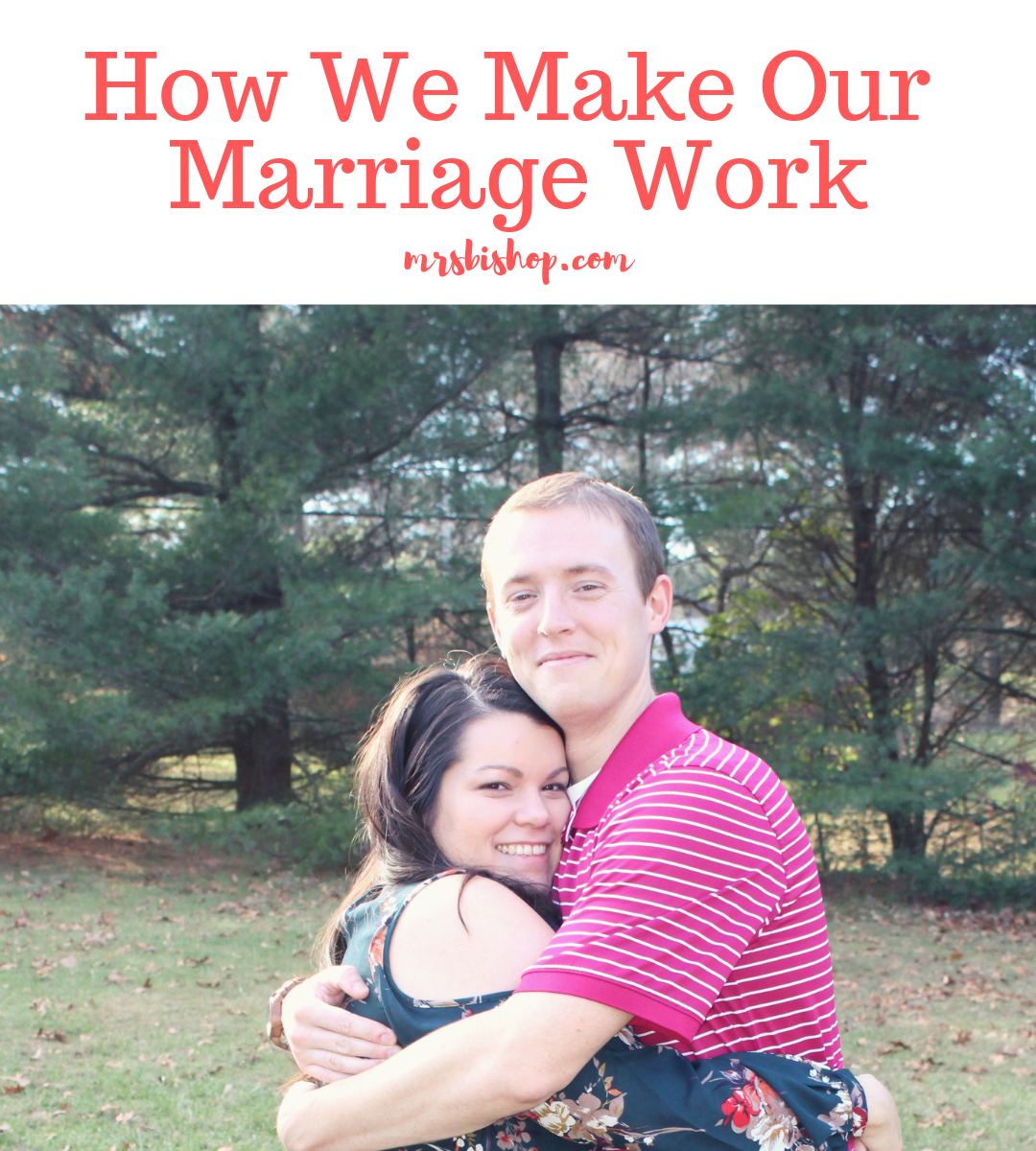 How We Make Our Marriage Work

I am reluctant to share marriage advice a lot of times, because some people scoff at the idea of someone else offering them ‘tips on making their marriage work.’ And I get it! Everyone’s marriage is different. We all have different love languages and roles in our marriages. Sometimes I wonder how I, as a stay at home mom who homeschools, can offer advice to a working mom whose kids are in public school? So, most of the time I don’t.

So, instead of offering advice to you- I’m just going to share what makes MY marriage work. And believe me- I am by NO means an expert. But, with almost 12 years of marriage under my belt- I would at least say I’m a novice? We rarely argue, we get along like best friends most of the time, and we’re still just as in love as we were as teenagers. So, I’m going to say I have a little bit of knowledge on the subject. With that being said, here’s my tips on what makes my marriage work

I know, I know. Every single marriage book you ever read will start out that way. But it is an important part of making a marriage work- and last. The worst thing you can do is bottle up everything that your spouse does to make you mad- because it will come spewing out later at a time when it’s not even really relevant. You will be throwing all sorts of daggers that don’t even pertain to what you’re arguing about. That’s where resentment builds and you say things you don’t mean. And that kinda stuff makes a crack in your marital foundation. We all know that cracks in a foundation are NO good!

You know that scene from The Notebook where Ryan Gosling tells Rachel McAdams,

“You tell me when I’m being an arrogant son of a b**** and I tell you when you’re being a pain in the a**! Which you are, 99% of the time. I’m not afraid to hurt your feelings, you have like a two-second rebound rate and you’re back doing the next pain in the a** thing.
So, what?
So it’s not gonna be easy, it’s gonna be really hard. And we’re gonna have to work at this everyday, but I wanna do that because I want you. I want all of you, forever. You and me. Everyday.”

I used to be SO guilty of this. But, I’ve gotten much better. If I’m angry with my Husband or something is irritating me, I tell him. And if I’m being unreasonable he tells me. I know that seems counter-intuitive to a happy marriage, but it’s not. Because we communicate those things when they’re happening. In real time. So they don’t come up later- at a really bad time.

The flip side of the communication coin, is listening. It’s easy to tell your spouse what’s bothering you. But, really listening to their needs can be harder. Especially as a Mom, I have the needs of my child to worry about too- and sometimes the needs of my spouse get pushed farther down on my list. However, I’ve noticed time and time again- that the more that I fulfill his needs- the more he reciprocates mine. I joke a lot and say happy wife, happy life- yes. But, happy spouses beget happy spouses. You know what I’m saying?

And please- do not make me get into the importance of dating your spouse again! Spending time in each other’s company is a HUGE part of making a marriage happy. I know it’s hard when you have little kids. But, you need that time together, to reconnect.

I know so many people whose marriages didn’t work because they didn’t know how to communicate with each other, they didn’t know how to meet each other’s needs, and they forgot to spend time together. Then, they forgot why they fell in love in the first place. And that breaks my heart. I don’t want to see that happen in my marriage, so I’m always working at making our marriage work. {And so is my Husband}.

Sometimes we forget- marriage IS work.

We sometimes laugh about it, but before we got married, we both agreed that we don’t believe in divorce. So, whatever it takes we’re in this thing for the long haul. Even when times are tough- when things get hard. We said until death do us part, and we’re sticking to it.

I hope this jumbled up mess makes sense to you- and that the most important thing you take from this is that communication and listening are so important to a happy marriage. I SO want everyone to live in happy wedded bliss, but I know that isn’t always the case.

{Also, this post is meant for people who are both willing to work on their marriage. If only one half of the marriage is willing to work- things get substantially harder. In that case I would recommend some books on dealing with that [would you like to see a post with some of my favorite marriage books?], or a good marriage counselor. And in the case of an abusive marriage, where one person is hurting the other in any way, shape, or form- this kind of advice is of no help, and I urge you to seek help.}

If you could offer one piece of marriage advice to a friend- what would it be?

You may also like: ‘Marriage Tip: How to Flirt With Your Husband.’

Pin it for later: